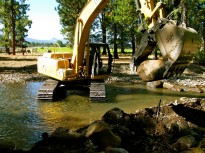 Sisters new skate park is nearing completion and Robinson and Owen played a key part in making it a reality.  Robinson and Owen joined many other community partners to donate time and equipment to complete this complex and ambitious project, initiated and implemented by Sisters High School Students.

“Excavating the bowl and setting the drain were crucial parts of our building process.  We planned on doing these tasks ourselves, but would not have been able to.  Robinson and Owen coming forward and offering their help was one of the most valuable offers of support we received…..I believe that Robinson and Owen’s generous donation to the Sisters Skate Park Alliance is an example of the attitude and perspective that makes Sisters one of the greatest communities to live in….  Robinson and Owen could have easily looked over our project and found a reason not to get involved, but instead saw an opportunity to help the kids of their community make their dream a reality. “

Our crew installing 8 inch ductile iron water main line.
The Crooked River Watershed Council was impressed with the work by Robinson and Owen on the Stearns...read more >

"I've used Robinson & Owen on a previous project. I am a community homeowner, not a key business...read more >